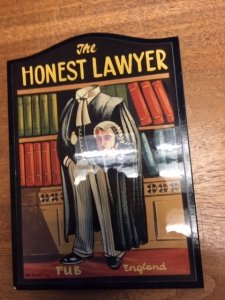 It is not a compliment to say a lawyer has a “sharp practice.” It does not mean that he is the sharpest pencil in the drawer or that he is well-dressed.

I first heard that term when I clerked for the public defender during my final year of law school. I asked the public defender what it meant. He told me it was a lawyer that took short cuts and could not be trusted. You needed to get everything from him in writing because he was not as good as his word.

Webster’s Dictionary defines A “sharp practice” as a “dealing in which advantage is taken or sought unscrupulously.”

Occasionally a divorce client will hire me thinking that I will help them take advantage of their spouse. They want me to find a loophole or a way to keep more than their share of assets or income. Like the President, they are looking for their Roy Cohn.

Upon entering my office you will see a sign from The Honest Lawyer Pub in England. Take note. If you are looking for your Roy Cohn, he is not at this address.

It is the policy for the court to provide timely justice for the citizens of Maryland, so getting a postponement in your divorce case is not easy. All requests for postponements have to be by motion, in writing, and state good cause for postponement.

The court does not usually consider the following as a good cause for postponement:

If you are getting divorced or thinking about divorce, you must see the Netflix movie, “Marriage Story”.  My son saw it and asked if divorce law was really like the movie.

So I decided to watch it. Scarlett Johansson and Adam Driver fall in love, get married and have a son together. Inevitably, different agendas and unwritten agreements bring marital discord. They agree to settle their differences amicably without lawyers.

Send in the Divorce Lawyers

The wife hires a divorce lawyer played by Laura Dern. Dern (who reminds me of two or three lawyers I have had cases against) is all sympathy as she listens to the wife’s story. She sits down next to her on the couch in her well-appointed office.  At the end of the interview, the wife is crying and the lawyer hugs her. The wife says, “and he is having an affair.” The lawyer says, “That bastard!”

All the lawyers get the legal fees. The wife’s lawyer charges $900 an hour and requires a $10,000 retainer up front. Alda informs the husband that he will probably have to pay some of the wife’s legal fees as well.

Once the lawyers take over, the gloves come off, and they start talking about the wife’s drinking and the husband’s infidelity.

The custody evaluator is a hoot. You can feel the discomfort building as she observes the husband and son interacting together at dad’s apartment.  By the end of the scene, you know that dad is going to get an unfavorable report.

The residents of Bhopal, India were suffering through a drought this summer. In desperation, they sought to appease Lord Indra, the Hindu God of Rains. The only way to do this was to hold a special marriage ceremony. It was special because the bride and groom were frogs.

The frogs were married on July 19. It began to rain. And it rained and rained. It is still raining two months later. Bhopal has received 26 percent more rainfall than normal. Rain in Bhopal on Sunday almost broke a 13-year-old record of most rain recorded in a city.

Bhopal has recorded 48 mm of heavy rain in the last two hours. The city’s lower sections flooded. Officials released three gates at Bhopal Kaliyasot Dam, Bhadbhada Dam, and Kolar to release the water and prevent the dams from breaking.

There was only one thing left to do to stop the rain. The frogs had to be divorced. During the divorce proceedings, mantras were chanted and the frogs were separated. The people of Bhopal hope the frog divorce will bring them relief from the rain.

Who had more wives, Larry King or King Henry VIII?

King Henry VIII had six wives whose fate is memorialized in this rhyme:

Larry King has had seven wives.

Divorce lawyer and mediator Ron Ousky has created a set of conversation cards to help you stay married.

Ousky got the idea from listening to his divorce clients and wishing he could turn back the clock and get them talking to each other.  He says that as kids, jobs, in-laws and money stresses begin to take up all the conversation time in a marriage, couples grow apart.

His cards prompt couples to talk about ideas that keep couples connected, like gratitude, mistakes, forgiveness, and how we express love and want to be loved. The idea is that these topics will help you stay married.

As for a divorce lawyer promoting marriage, Ousky says it is not that unusual. Divorce lawyers want to help people in distress just like doctors want people to be healthy. And, he notes, there will always be enough conflict to keep divorce lawyers busy.

Here are some secrets that divorce lawyers hope you’ll never find out.  Because if you did, they might go out of business.

“Arguing and getting angry, never works.  Understanding and loving, always works. – Notes from the Universe.”

“May your case be decided by a piece of paper that flies through an open window at the courthouse on the day of trial.”  – Unknown.

“He came to court seeking justice.  That was his mistake.’ – Unknown.

“May you have a lawsuit in which you know you are right.” – Ancient Chinese Curse.

“We pay judges to make decisions, not to be right.” – Unknown.

“The secret to the success of my marriage is that I’m hard of hearing and have a short memory.” — Anonymous

Cincinnati Judge Amy Searcy is redesigning the courtroom for better divorce proceedings. She wants better outcomes for families going through the divorce process.

Courtrooms are pretty intimidating places. The walls are wood-paneled. The ceilings are high. The judge sits higher than everyone else behind the bench. It is a solemn and somber décor evoking the majesty of the law.

It is set up for a civilized form of combat. As Judge Searcy sees it,”I wasn’t here very long before I started to realize that the way the courtrooms were set up, it was almost like a battleground. There is a plaintiff and a defendant’s table so it’s me versus her, me versus him.”

So Judge Searcy decided to remodel her courtroom, using her own money, to make it a more relaxed environment for divorce hearings. She replaced the plaintiff and defendant tables with an oval conference table.

Now the parties sit next to each other at the same table facing the judge with the attorneys on either end. She also hung large pictures of area parks and put a sign on the wall that says “Best Interest of the Child.”

A recent case explores the boundaries of normal communication between divorcing spouses in the digital age. How much is too much?

Daniel Meredith, 42, has been in a divorce battle with his estranged wife, Donna, 35, in Queens, New York. He is an artist with an architectural firm and she is in marketing. The couple has three young children.

The wife complained to the court that the husband was sending her too many text messages.

The husband told the judge he sent his wife about eight texts a day on average over the past year, and she sent him about six texts a day. He cited statistics that said the average American sends and receives 94 text messages a day.

The judge didn’t buy it. She said more than 5,000 text messages in a year was beyond normal communication and amounted to harassment. She issued a temporary restraining order limiting husband to one text a day and permitting him to speak to the children 15 minutes a night on FaceTime.

The husband is opposing making the restraining order permanent.

“Marriage is one of the few institutions that allow a man to do as his wife pleases.”